Demonizing the other: How narratives kill history in textbooks

Hindus inflicted pain on the Muslim minority or Muslims subjected Hindus to torture during Partition, both the narratives are true. But the conflict arises when they are segregated, when each is solely presented as a villain to the other, and that too on a medium as sensitive as a textbook.

This was discussed at a session titled ‘Skewed History: How History Dies in the Syllabus’ held on Friday at the 8th Karachi Literature Festival under way at Beach Luxury Hotel in Karachi.

“There is a need to [not separate the narratives to suit the audience it is catering to] put both the stories together so that the perspective of each can be sympathised with,” said Qasim Aslam, a co-founder of The History Project Limited, an education initiative endeavouring to inculcate critical thinking and tolerance among students.

“We have been trying to find what children like,” he said. “And we have seen they like to play and stay out of the classroom.”

So Aslam and his colleagues combined play and lesson to teach students about the partition of Bengal in 1905 which had divided Muslims and Hindus in an unfair ratio – while one part (East Bengal) did not have a major difference between the Hindu and Muslim population, the other (West Bengal) had an unfairly large number of Hindus as compared to Muslims.

To explain this and the plight of a minority community, Aslam said they divided students into two teams for a cricket tournament. “It was a class of 30 students. One team had 27 players while the other had only three players.”

The unfair division made the minority team lose the match. “We even held a tug of war session between the two teams and obviously the team with three members lost.” He added that through this exercise they tried to make the students realise what the minorities feel in co-existing with a large number of people who feel they are different. 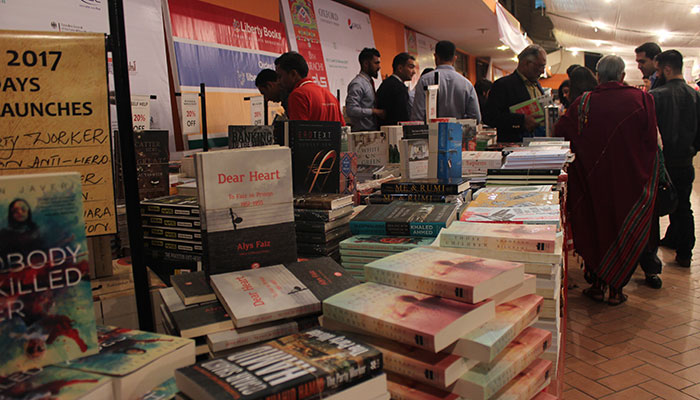 A book fair at the lit-fest exhibits works by local and foreign authors- Geo.tv

Husain said if both sides of a story are provided to students, they can navigate their way through to the gist of the matter. “Children should be left to identify whose point of view it is,” he said.

However, at present, many teachers in the Pakistani education system are “slaves of the textbook”, Husain said.

In an exam if a student quotes an answer from anywhere other than the textbook, the teacher downgrades him or her while marking the paper. This skews the learning process of students, more so because the ‘us versus them’ divide is present in the very textbooks, he said.

However, according to Husain it is the intention that drives one’s attention. If a teacher intends to teach both sides of a story to the students, it would in turn reflect in the focus of students.

“We have different sorts of books [available] but it is the teacher who can inflict horror or do magic in the classroom,” said Baela Raza Jamil, an educationist and brain behind the Annual Status of Education Report (ASER).

Students should not be limited to the confines of textbooks as they, especially the ones on history, are not objective realities. “History is not just a reality, it is a perspective,” said Newal Osman, a professor at the Institute of Business Administration.

The provincial chief minister has recently approved the formation of a curriculum authority, said Jamil, but the educationist questioned if this would help overcome the fear that emanates at the thought of a subject outside the realm of topics that glorify, for instance, Muslims in Pakistan.

Another speaker of the session, Anam Zakaria, an educationist and researcher, shared her experience of observing history being changed at the hands of state authorities in Kashmir. “We have to be conscious of what the state allows,” she said.

Nevertheless, just like each family has and takes delight in its own recipe for kheer, each narrative is dear to the people it belongs. The kheer analogy by Husain made the hall echo with the audience’s laughter.