Nobel Peace laureate Malala Yousafzai, who became only the sixth person to receive honourary Canadian citizenship Wednesday, said strong women who stand up for their rights, not terrorists, are the true representatives of Pakistan.

In an exclusive interview to Geo News, Malala, the youngest person to receive the honourary citizenship, stressed that terrorists do not represent her country.

“Women who stand up for their rights, including myself, represent Pakistan. Terrorists do not represent my country,” she said.

Malala said she is proud of Pakistan and vowed to take it to newer heights.

“I am proud of Pakistan and I miss Pakistan. We are Pakistanis and we will take our country forward,” she pledged, adding that she will come to Pakistan soon.

Malala was welcomed to the seat of Canada’s democracy in Ottawa by Canadian Prime Minister Justin Trudeau on Wednesday, before advocating for women and girls’ education in her speech to Canadian members of parliament and senators in a joint session – becoming the youngest person to do so at age 19.

Malala praised PM Trudeau for speaking out for women´s rights, gender equality and refugees “during a time where the world is hopeless.”

“I wanted to say that Trudeau is an amazing person and an inspiration,” she said. “He is a true example and I´m sure that other world leaders will learn from him.” 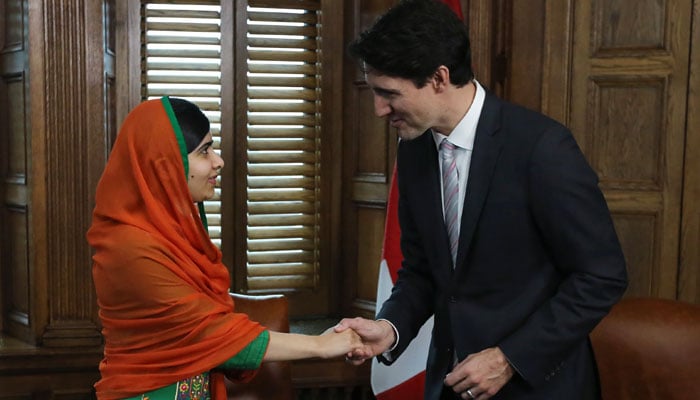 During a ceremony inside the Gothic Revival halls of Canada´s parliament, Trudeau said, “Today we proudly bestow honourary Canadian citizenship on Malala Yousafzai, a young woman from Pakistan who has done tremendous things for the people of her country and for the children of the world.”

“Malala, your story is an inspiration to us all,” he said. 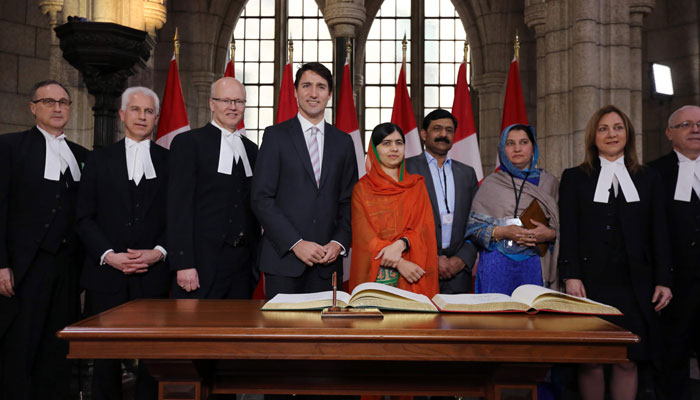 “The message I am spreading around the world to our leaders, to our politicians, (is) that they must prioritize education for each and every child around the world,” she said to a standing ovation.

“There are more than 130 million girls that do not have access to education,” she said.

Malala leaped to global fame after a Taliban gunman shot her in the head on a school bus in October 2012 for defending her right to attend school.

She has lived in the English city of Birmingham, where she continues to advocate for women´s rights, since a successful operation following the attack.