The agriculture sector has posted a growth of 3.46% – highest in the last five years – in fiscal year 2016-17, which greatly helped the government in achieving overall economic growth of 5.3%.

After an embarrassing slowdown in agriculture growth (0.27%) in 2016, the government decided to incentivise the sector through different schemes and the effort paid off this year.

The agriculture sector met its growth target of 3.5% mainly due to the increase in disbursement of agriculture credit in 2016-17. During July to March 2016-17, the disbursement was observed to be 23% higher compared to the previous year.

“These developments, along with the Prime Minister’s Kisan Package together with other relief measures, have started yielding positive results,” according to the Pakistan Economic Survey 2016-17 released on Thursday.

Important crops – wheat, rice, sugarcane, maize and cotton that have a share of 23.85% in the overall agriculture sector – supported the growth of the sector in 2016-17.

“This was made possible by better harvesting of major crops through greater availability of agriculture inputs like water, agriculture credit and intensive fertilisers off-take,” it added.

The growth in crops was registered at 3.02% against a negative growth of 4.97% during the same period last year. This growth is also the highest in the past five years, pointing to an important aspect that agriculture growth is mainly dependent on the performance of crops because the performance of livestock – a sector that contributes 58% in the agriculture sector – has remained quite stable in the same period. 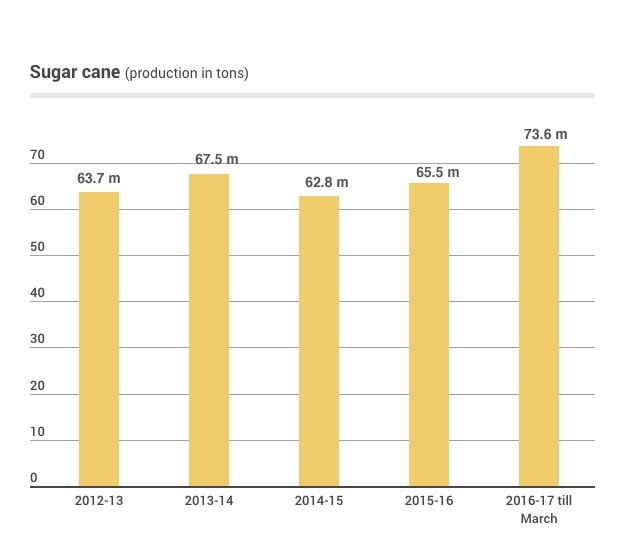 Other sub-sectors of agriculture like livestock, forestry and fishing posted growth of 3.43%, 14.49% and 1.23%, respectively.

The upturn in crop yields by significant margins occurred both due to the increase in production and improved yields.